I stayed at El Goli Hotel 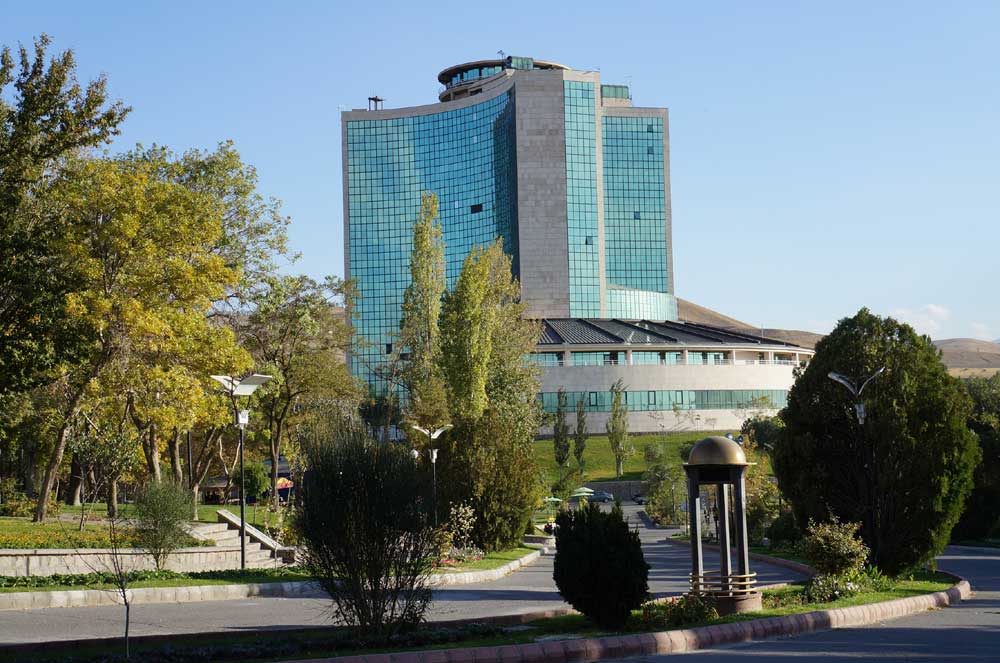 I took a bus from Ardabil to Tabriz. It is about a 2-hour bus ride and I paid about $3. From the bus terminal, I took a cab to Hotel El Goli in a park with the same name. Tabriz is a beautiful old city and some archaeologists suppose that the Garden of Eden was probably located in Tabriz. El Goli (Pars) hotel is a 5-star hotel and I paid $48/night for a room with a view of the park and mountain. I especially liked the glass elevator. Click HERE to see a Youtube video of me riding the elevator to my floor.  A few minutes after I checked in I took my camera and went to the Bazaar. This historic bazaar complex is one of the most important commercial centers on the Silk Road. It is the largest covered bazaars in the world and was inscribed as a World Heritage Site by UNESCO in July 2010. I talked to a few shop owners and found them very informed, kind and open minded. Everybody that I met was bilingual (Azeri and Persian) and I had no problem communicating. Next day I went to see the historic sites of Tabriz and see the town. The most notable sites were: Qajar Museum, Constitution House of Tabriz, and Parvin E’tesami’s house. This is a wonderful combination of European and Old Persian cities. One more thing about Tabrizi: I found them very authentic and comfortable in their own skin. Food: Fantastic. I like this city. I can live here and ride a bike everywhere.

Hotel El-Goli in Tabriz offers several tours that are managed professionally by the hotel. I took a tour to the rural district of Kandovan which is about 30 minutes south of Tabriz. I paid $11.60 for a 3-hour tour of the village of Kandovan and a nearby hidden city and Laleh hotel. On the way to Kandovan, we passed through Osku, a city with less than 17,000 residents. On this day, it looked like the entire population of this city was out on an annual walkathon event that included a modest hiking (see picture below). After taking a few photos and talking to a few people we drove to Kandovan village. The village is located in a region where predecessors of Persians and the Meds first entered the recorded history more than 800 years BC. Many of Kandovan’s homes have been made in caves located in cone-shaped, naturally formed compressed volcanic ash formations (click HERE for more and HERE for a video). I met Mr. Bahdori who owns a small grocery store in the village and lives in one of the homes in caves. He was very generous and took me for a tour and allowed me to go inside his house to experience this unique living arrangement. Kandovan is famous for its honey and he offered a few pounds for next to nothing. From here I went to Laleh hotel which is a 5-star hotel built in caves. I paid $1.50 to get a tour of the hotel and was amazed at the luxurious settings. It costs about $70 per night off peak season. Next, I visited the Hilavar village (hidden village). This village was carved in the mountain for protection when Mongol invaded Iran. This entire village was carved around 1220. I cannot imagine how they managed to carve this with primitive tools. Unfortunately, the village is not being protected from vandals and graffiti are all over. The inhabitants of this village protected this marvelous site from the Mongol and apparently, we are incapable of protecting it from vandals. Click HERE for video clips.