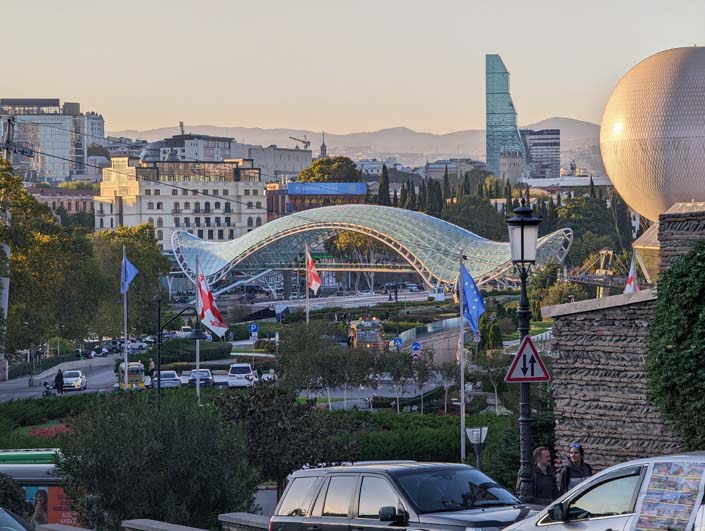 Georgia is part of the Caucasus region, bounded by the Black Sea to the west, Russia to the north and northeast, Turkiye to the southwest, Armenia to the south, and Azerbaijan to the southeast. The country covers an area of 69,700 square kilometers (26,900 sq mi) and has a population of 3.7 million people. Tbilisi, formerly Tiflis, is the capital of the Republic of Georgia and is situated on the Mtkvari (Kura) River and Kartli mountain ranges.

I flew from Istanbul to Tbilisi on October 29, 2022. The Tbilisi airport is about 10 miles from the city center. The process of getting through customs was very quick and efficient. I purchased a sim card at the airport and took a cab to the Bricks hotel. It was about a 10-minute walk from my hotel to the Bridge of Peace and the Rike Park which are situated in downtown Tbilisi.

Tbilisi is an attractive city. The Mtkvari river is bordered on the right bank by a very attractive boulevard. Beside the river, the old town, with narrow, winding streets, is dominated by the ruins of the old fortress and the huge, symbolic figure of Georgia on a ridge above it. In the old town is the Sioni Cathedral, dating from the 5th century, the Metekhi Palace of the Georgian kings, and the 6th-century Anchikhati Church. Newer parts of the city lie beneath Mount Mtatsminda, accessible by a rail line.

Click HERE to watch video clips of my trip.